skip to main | skip to sidebar

Kuala Lumpur: The Lost Art of The "Serunai Burung" 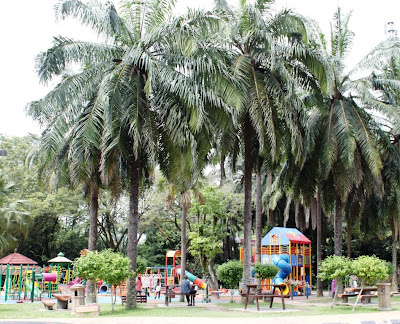 A trip to Taman Tasik Perdana brought me more than I can imagine! Lush greenery surrounded us and a delightful scene of children running around at its playground provided a peaceful ambience. It certainly was the perfect place to rest and relax! That day, I certainly didn't expect to make a new friend--but this shows you how friends appear in the most unlikely of places :)

I first noticed a cheerful Chinese man talking to two women wearing tudung while my father was trying to park the car. The Chinese man handed the women two long things that resembled a chopstick from afar. He lifted the chopstick to his lips and blew--and it emitted a lovely shrill sound like a bird's song.

I realized what it was--a serunai burung! Or rather, a bird-whistle! I quickly snapped a picture through the side window, curiosity getting the better of me. My dad parked the car at the side of the road and I went to check out the whistle, marveling at the melodic sounds that were produced just by effortlessly blowing into the whistle.

Reaching him, the cheerful man introduced himself as Uncle Cheng. He was selling the bird-whistles at RM4 each. He told me that for every whistle sold, RM1 would be given to Charity for the Handicapped. Uncle Cheng pointed to his leg, and I was shocked for a moment to see that his right leg ended at his knee. He just smiled and said, "I wanted to give back to them somehow." 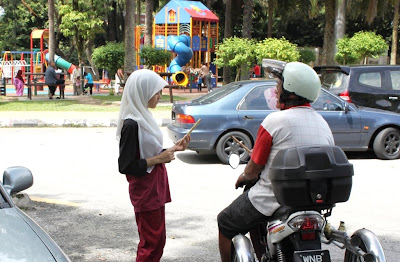 Uncle Cheng's words really made me feel touched. Imagine his strength going from place to place not only to earn his bread, but also to collect funds for charity! This was truly a hero--he had no medals and no recognition by our society, but to me Uncle Cheng would always be a hero in his own right.

As he taught me how to use the whistle, Uncle Cheng mentioned that he had made the whistle himself! I was amazed and asked him more and more about the serunai burung.

Friendly and courteous, Uncle Cheng's voice was animated as he told me about the art of his forefathers. "I learnt this from the olden people," he said with a smile. "Now seventy years and I'm the only one who bikin [make] by hand. Gone is this practice..." 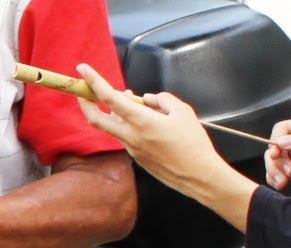 The bird whistle in my hand felt light, smooth and an intricate design decorated around the bamboo in a spiralling pattern. It's fully handmade, Uncle tells me. He cuts the 'body' of the whistle from the bamboo tree until a suitable length is met. Then he rubs it with sandpaper, ensuring its smoothness.

After that, Uncle cuts its 'mouth' with a sharp knife, making sure that there is no sharp edges to hurt the mouth of the whistler. He makes the intricate markings on the whistle carefully with a brush to make the whistle more visually pleasing, finishing the art by painting it with syelek to ensure its sturdiness. 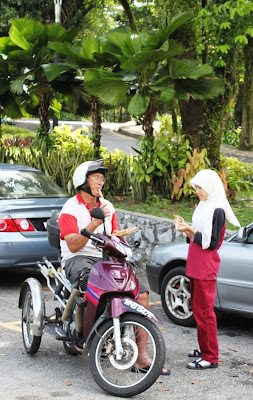 "Nowadays, noone bikin [make] anymore. That's why I usually sell to tourists." He smiles impishly "I charge them RM5, RM6. More bussiness over at Sungai Way where I came."

When I asked uncle why noone makes it anymore, he sighs. Whistle-blowing is an art! And so he launches into an interesting story. Back then when Orang Asli (indigenous people) ruled the land, they hunted for animals for their nourishment. They made simple bird-whistles from the bark of trees to attract wild birds to be caught and bred. It soon became an art to them, even when bows and arrows were more successful in catching birds.

"This should be a heritage." Rueful was his expression. He blows air into the whistle in rhythm, making a shrill hooting sound not unlike a raven's call. "It's great fun, especially for children. Now, they use the internet and tweet there. Where's the fun in that? Let's use the serunai to make real bird songs!" 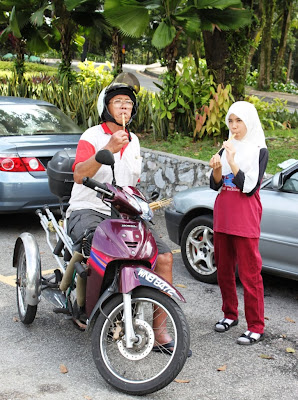 Sunshine's Rays
I'm a fifteen-year-old girl, living life one step at a time! Reading novels and running are what I love to do. I'm always trying to improve my writing, so please give me constructive criticism by dropping a line in my chatbox! :)